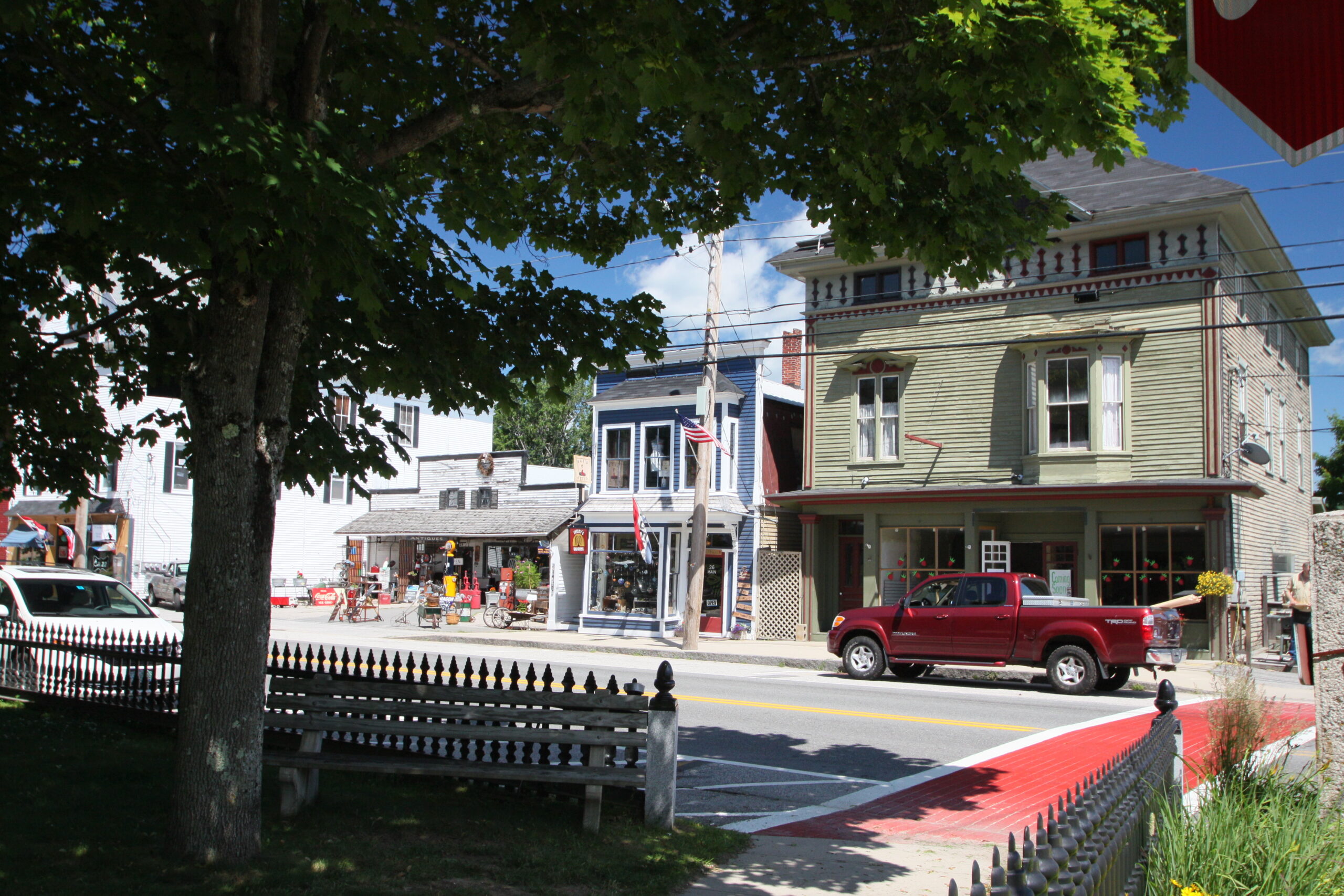 Where are we located?
The Cornish Inn is located in Cornish Maine, 45 minutes west of Portland (route 95, route 1), on Route 25. We are located 45 minutes southeast of North Conway (take route 302 to Fryeburg, then route 113 to Cornish, then Route 25), or 30 minutes from the Maine summercamp hotspots near Sebago Lake, Bridgton and Naples Maine.

about modern day cornish (click here for the history of cornish)

Modern day Cornish has been continually been selected as a best place to live, and prettiest town, in many reviews and magazines. It is located on Route 25, halfway between the coast in Portland, and the White Mountains in North Conway, and is a perfect resting spot before arriving at the lakes and summer camps of Western Maine's 'Lakes & Mountains' region. The town has a beautiful shady park, many antique stores, a coffee shop, herbalist, yoga studio, and many other stores that offer fine art and crafts, toys, hand blown glass, and more. The newly renovated library is just across the street. Cornish is well known for several fantastic restaurants, including Lindsay's at The Cornish Inn (scratch kitchen, breakfast and lunch), Krista's Restaurant (fine new American, reservations recommended), Bay Haven Lobster Pound (fresh seafood), and Fairground Pub (the largest bar in Maine). The town is conveniently located for access to both the Saco and Ossipee rivers, perfect for swimming and boating, as well as Sebago Lake, Burnt Meadow Mountain, and many miles of snowmobile and hiking trails. The town hosts a free live music series in the summer, and is close to Hiram where the annual Ossipee Valley Music Festival brings a crowd of thousands to the area each July for its annual roots and americana music and camping festival. Just a few miles down the road, southern Maine's certified organic orchard Apple Acres offers apple picking, live music, a restaurant and farm store open daily from August-October. A car is required to visit Cornish, as there is no local public transportation.

History of the founding of Cornish

Various indigenous groups have lived in the area now known as Maine for over twelve thousand years. Generally, the peoples living in the area can be referred to as Penacook Abenaki and eastern Algonquin, and currently of the Wabanki Confederacy. It is important to note that many of the various names referred to here, which have been passed down to our modern time, primarily refer to places that were under stewardship of a group at the time, and are more reflective of European perceptions of division of ownership, than actual clear geographic divisions between peoples that existed at the time.

The modern town of Cornish is located on the path of the Pequawket Trail. The word “Pequawket” (sometimes spelled Pigwacket) is believed to mean ‘sandy land’. Indigenous families traveled the trail seasonally between what is now known as Biddeford Pool on the ocean, and the Mount Washington Valley. Those who lived in this area were members of the highly respected Tortoise Clan (also referred to as Newichewannock) of the eastern Algonquins  (also known today as Abenaki, whose descendants are part of the Wabanaki confederacy).

During the 1600s French fur traders (Acadians) bartered with the Indigenous peoples. The first European settler in the Cornish Area was a British fur trader named Francis Small who arrived in 1665 (lived from 1625-1714). He found the area to be a lucrative location for trading. It is located near the confluence of the Ossipee and Saco Rivers (in modern day Hiram), as well as the meeting of the three indigenous trails (now Route 5, Route 25, and Route 113).

British colonizers from the area known as Massachusetts, in attempting to settle in the area, did not respect the sovereignty or humanity of the people already living here. They referred to those people as savages, abused trade deals, and eventually destroyed the great settlement at the confluence of the two rivers. Maine was the first state in which government payments for scalps was a normalized practice. Eventually some members of the group living near the two rivers marched on the home of Small and burned it to the ground. However, a Sagamore referred to as Captain Sunday, (Wesumbe) warned Small and saved his life. He later traded a tract of land with Small part of which became Cornish

This trade is what is known as the Ossipee Tract, and includes the modern day towns of Limerick, Cornish, Limington, Newfield, Parsonsfield and Shapleigh. In exchange Small gave two gallons of rum, two pounds of gunpowder, two blankets, four pounds of musketballs, and twenty strings of beads, for 256,000 acres.

The land was not settled by Europeans until after the signing of the Treaty of Paris, in 1763.

.In the 1770s Small’s heirs discovered the deed from Captain Sunday (Wesumbe) and came to populate the land and sell it off. The town of Limerick was given to their attorney as his fee.

During the 1700s, the village that grew up was first called Francisborough, then Cornishville. The town center was originally located on the High Road and the town was incorporated as Cornish in 1794. Maine became a state in 1820. A stage route was established along Main Street arrived in 1846. Victorian and Colonial homes were built along Main and Maple Streets and, between the years 1850 and 1860, teams of 80 oxen moved many homes down from the High Road to where the town center is today. It took 160 oxen to haul one house over the icy Saco River from the banks of Baldwin. The Cornish Inn was built in 1827 as a private home, less than 40 years after the official settlement of Cornish. The population of Cornish today is less than 1500 people, roughly the same as it was at its settlement.

Most of the history of Cornish was lost in a fire. This has been compiled from the works of authors and researchers Addie Small, Dr. William Teg, G.T. Ridlon Sr., Michael Chaney, the Cornish Historical Society, Wabanaki Reach, John Stuart Barrows, and Lisa Brooks.

Please Note: If you have information you would like to share with us about the history of this area, please get in touch!

Click here to return to the top of the page. 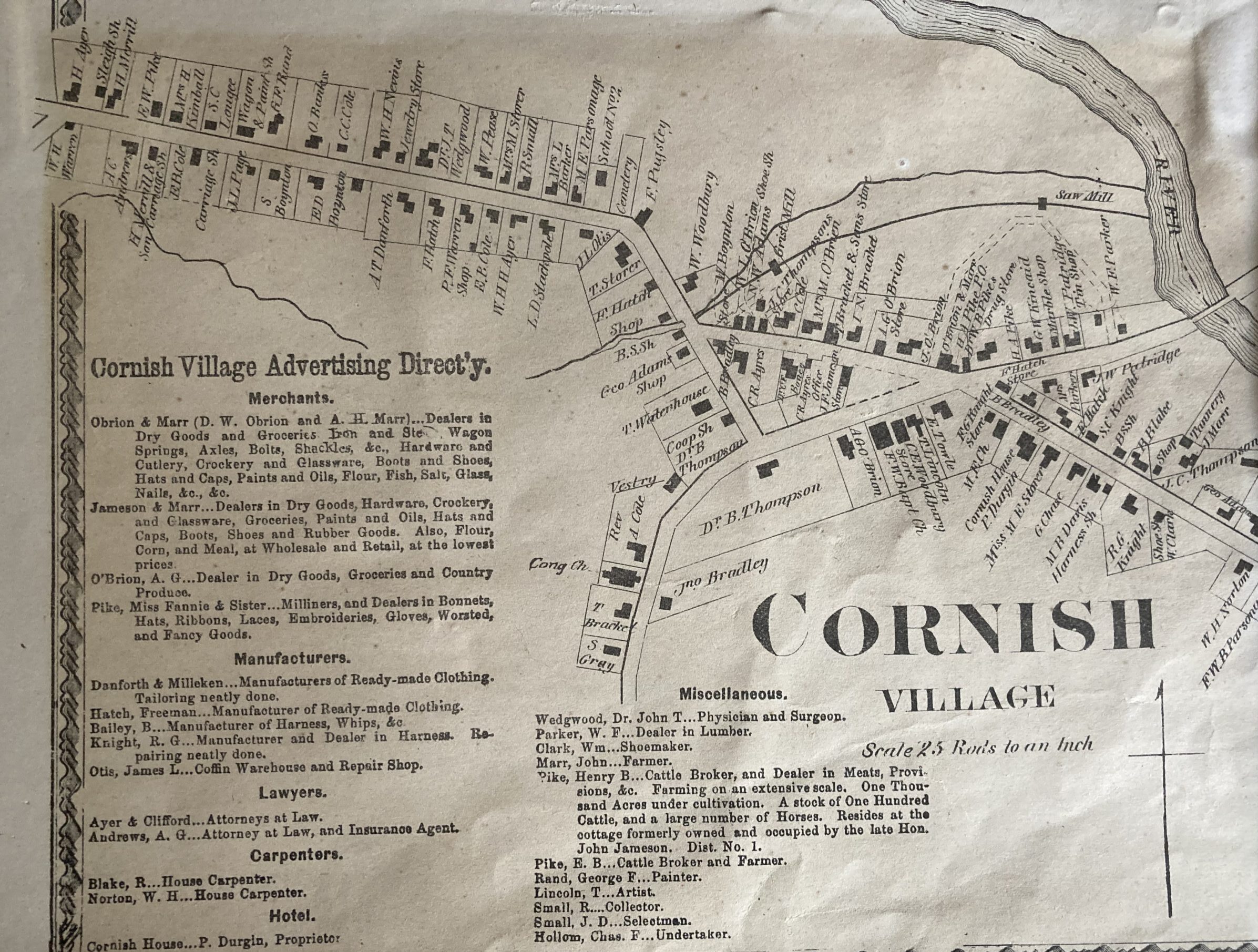 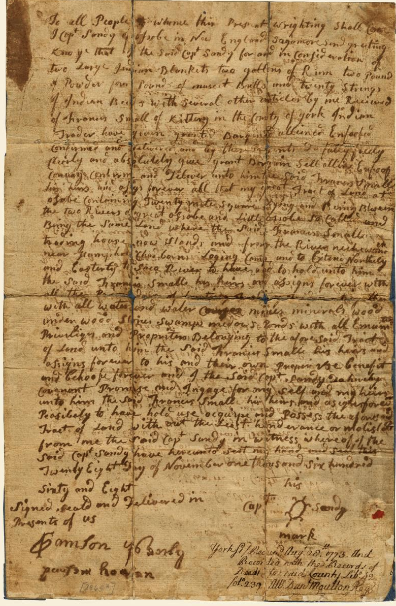 Above is the original trade paper for the Ossipee Tract, with the Tortoise signature of the Sagamore, Captain Sunday (Wesumbe) 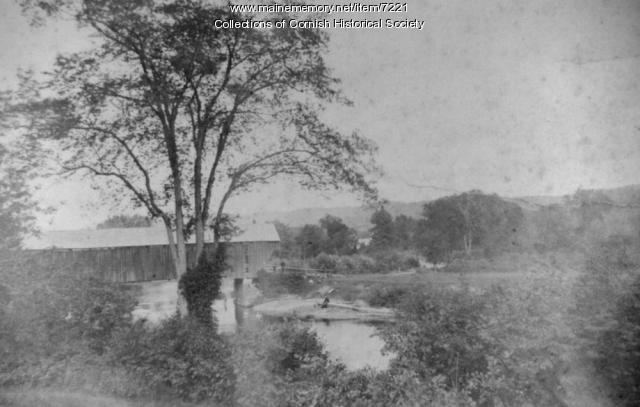 Covered Bridge between Hiram and Cornish, around 1900 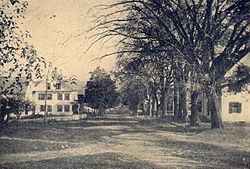